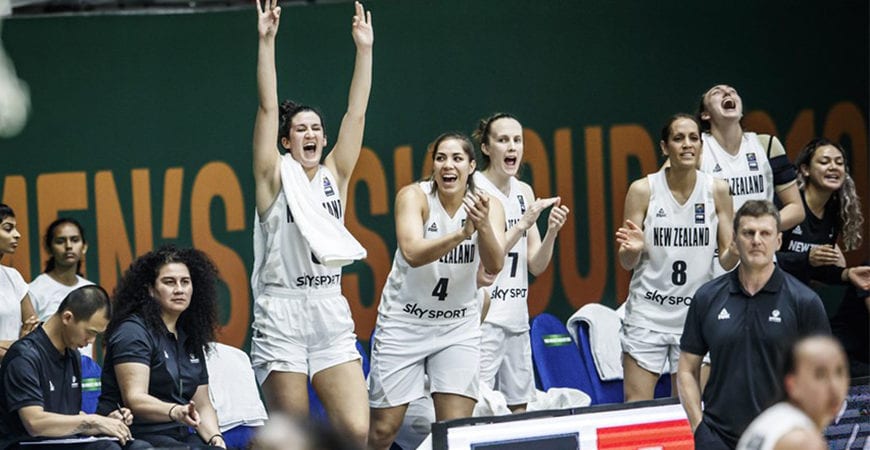 When the two teams met at the previous Asia Cup in 2017 Chinese Taipei won 65-45 to claim fifth place but on a night when their three-point shooting was much improved it was the Tall Ferns that prevailed this time.

The Tall Ferns scored 9 from 23 at 39% from beyond the arc, by far their best perimeter shooting in the five games played by New Zealand this week in India.

There were a number of standout performances by the Kiwis who were paced by a game high 18 points from Micaela Cocks (4/5 3PG) while Natalie Taylor added a dozen (5/8FG).

Playing 32 minutes Kalani Purcell was at her stats stuffing best amassing 9 points, 11 rebounds, 3 assists, 3 steals and a block. Stella Beck had another busy night with 7 points and 8 assists whilst Ashleigh Karaitiana was equally as industrious with 7 points, 7 rebounds and 5 assists.

Needless to say Tall Ferns Head Coach Guy Molloy was pleased with the performance of his team.

Molloy was also happy with the effort at the other end of the court.

“I was very pleased with our defensive effort tonight, we really locked it down well and we significantly out rebounded them 41-33 on the back of a great rebounding performance from Kalani Purcell who had 11.

“We are pretty buoyed by the result. Fifth is a better finish than the previous Asia Cup so hopefully we are moving in the right direction,” added Molloy.

Purcell opened the scoring in the contest before Ella Fotu scored immediately after coming off the bench. The Harbour Breeze guard made her first appearance of the tournament after being sidelined due to illness.

Karaitiana made an inside basket immediately prior to the quarter time buzzer to put the Tall Ferns 15-14 ahead.

Cocks knocked down New Zealand’s first three of the game and Beck made an And-1 play but when Taipei  made their fifth three of the contest New Zealand were 27-23 adrift.

A timeout from Molloy had the desired effect as his team unleashed a 13-0 run to finish the first half 36-27 ahead. Purcell made her customary steal and finish interspersed with threes from Tessa Boagni and Taylor (twice).

Cocks owned the third quarter scoring 13 of her team’s 22 points as they maintained their advantage to lead 58-43 with ten minutes to play. A remarkable statistic from the quarter was that a foul called on Chevannah Paalvast four minutes into the period was the first called on New Zealand in the first 24 minutes of play.

The Tall Ferns navigated their way through the fourth quarter to record a comfortable win, their second victory at the Asia Cup tournament