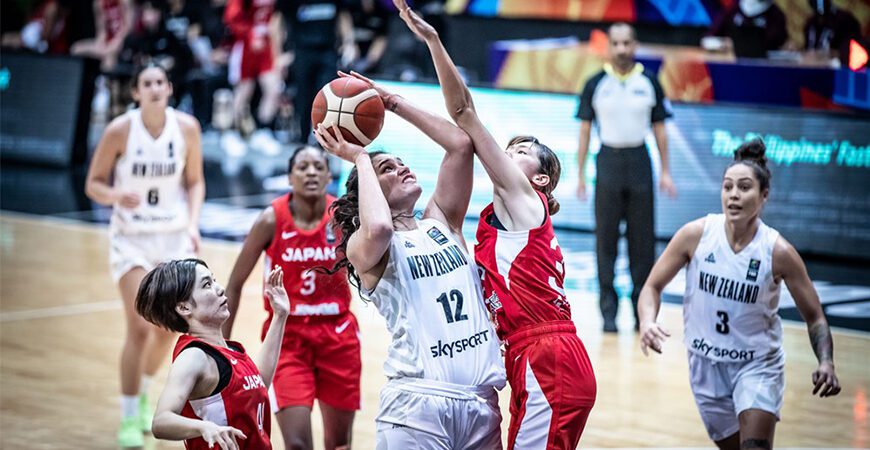 The Sky Sport Tall Ferns have endured back-to-back losses in the FIBA Asia Cup after going down 62-50 to Japan in Amman, Jordan this evening.

The team should take some encouragement leading into their next game against India. Staying to within 12 of World number 8 ranked Japan has merit, especially when the Japanese have five Asia Cup titles and that includes the last four in a row.

The Tall Ferns are still fine-tuning. Poor shooting from deep (3/18) and possession of the basketball (23 turnovers) were fatal flaws for the women in black, who now cannot afford to lose another game if they hope to finish in the top four and qualify for 2022 FIBA World Cup Qualifying Tournament.

The professional squad of Japan played at a frenetic pace throughout the four quarters, showing why these players are stars.

The Tall Ferns trailed by eight after less than three minutes in, so coach Guy Molloy called time early to rearrange his line-up and instruct his team to get more physical.

Super subs Tessa Boagni, Krystal Leger-Walker and Mary Goulding repaid their coach’s decision to throw them in early by being at the forefront of their team’s 9-0 run to take the lead.

The elder of the Leger-Walker sisters finished with six points in roughly five minutes, the last of which was a deft baseline floater. That score bumped their total 20 before the end of the first while Japan only amounted 13.

Charlisse Leger-Walker got on the board not long into the second spell, but she along with her teammates had trouble keeping their rhythm out of the break.

Japan collected several of the Tall Ferns’ misses and found points in transition. Those shots along with six turnovers in the quarter allowed for Japan to regain the advantage, 32-31, before the oranges.

The relentless hustle of the Japanese didn’t waver at the start of the second half, and it was tough going for the Kiwis in getting set on offence after being picked up full court.

A triple from Kalani Purcell settled the side’s nerves somewhat, but inefficient shooting from the outside made life easy for their opposition who doubled anything down low.

Defence was a lesser area of concern, although they too were fortunate as Japan had a hard time putting the ball through the hoop for most of the period. However, a late flurry of baskets in the last two minutes pushed the deficit for the Tall Ferns out to five (47-42).

Four turnovers weren’t what the doctor ordered to start the final 10 minutes of play and Japan made sure they were punished for those errors with threes from Stephanie Mawuli and Saori Miyazaki.

Molloy rounded out the fixture by deploying his bench as their foe’s buffer hit double digits, knowing he’ll need his key figures as fresh as possible ahead of a must-win clash against India.

Should the Tall Ferns come out on top in their last pool game they would then be tasked with battling the country who finished second in Group B.

They can’t think too far ahead though because anything could happen when they take the floor tomorrow at 11PM.