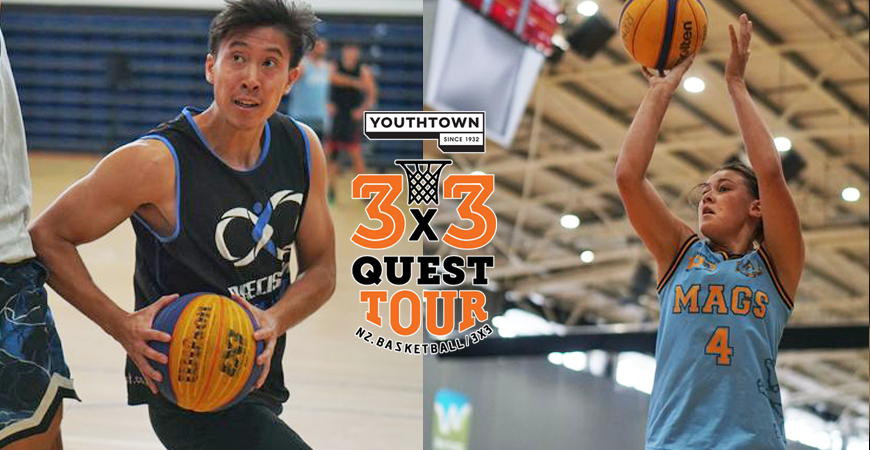 The first Youthtown 3X3 Quest Tour for 2022 tipped off in style today, with 26 teams converging on the Trusts Arena in Henderson to battle it out for basketball glory – all in front of an enthusiastic crowd of Auckland fans.

In the highly competitive Open Mens category, nine teams competed for a place in the 3X3 Quest Tour Finals in March. Category winner CB3.0 – who also won the Men’s Open in this comp last year – emerged the winners, knocking out opponents SCAM 21-13 in a thrilling game.

CB3.0 captain Chris McIntosh, says that it was great to get back into his first organised basketball event in a long while.

“It was good fun and some of the other teams were competitive in pool play; originally the plan was that we’d play with an Auckland-based team to try and warm up for the comp, but we had a few guys pull out at the last minute – so our team had a few ring-ins who did well,” says Chris.

“Both opponents [in the semis and finals] were both competitive teams, and we’ve played against SCAM however many years in a row so they’re always good to play against. Overall it was good fun to get back into it and we’re excited for the finals.”

In the Open Womens category, seven teams – the most ever for a 3X3 Quest Tour – faced off against each other, with HP Harbour Breeze beating JM12 in the finals by a 22-5 margin.

With four teams in the U19 Mens category, Hey Dude topped Avondangerous 17-15 in a close and entertaining final. In the Senior Mixed, six teams battled it out for the trophy; Samurai beating TBT 13-8, but with TBT announced as the category ‘winners’ as they were the top women’s team in the grade.

In addition to the games, the event also featured a slam dunk competition, won by SCAM’s Zach McKenzie – who wowed the crowd with a two-handed 360 dunk with his final attempt.

The Youthtown 3X3 Quest Tour now moves to the Trust Power Arena in Tauranga for its next leg, on Sunday 23 January. To find out more or to register a team, head to nz.basketball/3×3/3×3-quest-tour